Happy holidays.. It's meta-time just before new year hit's all of us.

Now, I think that it's about to give up posting short notes of various 3d printed items. After all, I've been making them quite a while, and even though I have lost count of the trinkets been made, I do know that I have spent over two kilos Pla-printing material. So what I was saying, is that novelty of the printing just for printing's sake is gone, and from now on I'll be using it as a tool for other projects. Projects that have been on back-burner due this new printer. 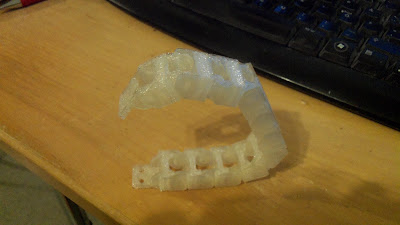 But before giving up entirely I decided to write a bit intro of couple items.

This on is nice 20 mm wide and cable guide made from 12 printed pieces. I'm planing to install to my Huxley printer so that it'll protect those heated bed wires. The main idea is to stop the cables connections breaking apart from stress caused platform movement during printing. 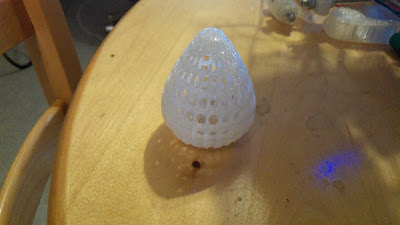 And: What's 3D printing without some shapes that are next to impossible manufacture with other types of machinery?

This Alien Egg, an abstract design, that is hollow inside. It weights very little compared to it's size and strength.

Of 3d design.. I'll get to the point, if there ever was a point. Point reminding me that I'll need to widen the coverage of the blog. During these first couple months (7 weeks)  of blog/vlog I have made just one teardown video, no reviews, and only electronics related stuff has been about me soldering the electronics board of the Printer.

So what I have at the list.. Some talk and examples about Polymorph, yes it's plastic too, but somewhat different material. Reviews of couple nice and useful electronics tools/meters. Some ideas of electronics, using old and new chips and components. Also some work with lasers and combining various building technics. Fixing various items and hacking something new from those that can't be repaired to original use.

And.. also more videos.. I think I'll skip the numbering and credit screens from videos that ain't so essential. Like that Alien Egg printing video, that lasts about 50 minutes, and has no texts nor voice over.  It's currently uploading to Youtube, and should become available at: