Next step, the 3d design software

As fun as slicing and printing various pre-designed object is, the real reason for having your own 3D machine is to design and make your own parts. And for that, I have started to download and install various opensource/freeware 3D cad softwares, for testing and evaluation. I have decided to test these three first.


First of them is Google Sketchup . I have met this software before, and have been occasionally using older versions. It's development began of making 3D buildings at Google Earth, since then it's been grown more versatile software and it can be used to make many kind of objects. Negative side is the lack of direct .STL exporting, but there are at least 3 different export modules available for free. Positive side is that it's well maintained, has plenty of manuals and tutorials so learning goes fast.

Secondly is OpenSCAD . It's a bit strange program for anyone expecting typical Cad-package, since all objects are made buy defining the shapes on text scripting. Good part is direct STL support and wide acceptance on RepRap community. For example source files of the Emaker Huxley printer I have are released on OpenScad format. I'm not saying it's a bad program, but just warning that at the first time it may feel a bit odd, since the approach is more like programming than3D designing.

Third on I have installed is FreeCAD   This is totally unknown program for me at the moment, so it's likely be the last of these three to test. Can't really tell much of it at the moment, but I know some people do use it for 3d object making.


Other free software I could install include Blender, but it's so big and I'm trying to find something relatively simple and nimble program.  There are also lot's of commercial 3D cad/cam packages (like Soldworks, Mastercam etc), but none of those are within reasonable budget for me. I have also found some potentially interesting free-to-use cloud based 3d tools, but so far none of them had what I wanted.

As a last note I'll add one pic, a partial collection of items I printed but have not shown before. All of these item's are either part of the Huxley or freely downloadable from Thingverse. 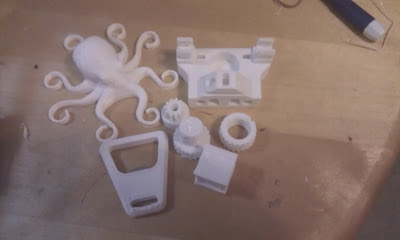